Is the Honeymoon Over with Your Dog? Dog Behavior Issues

Is the Honeymoon Over with Your Dog? Dog Behavior Issues

I can’t tell you how many clients, soon after adopting a dog from their local shelter, have said to me, “he was so great the first couple of weeks, and then all these behaviors started to show up”.  In most cases, there is a “honey moon phase” with a new dog in your home.   While it isn’t a certainty, it is fairly common that dogs take 2-4 weeks to show you their full personality and behavioral range. Many clients, who experience this shift in their new dog’s behavior, are really perplexed by the phenomenon. Further, these clients often tell me that they feel deceived as well. They frequently feel that the shelter, that had the dog prior to the adoption, withheld information about the dog. While I have run across the occasional shelter that isn’t as thorough as they ought to be in disclosing unflattering information, in hopes that it will result in a new home more quickly; the vast majority of shelters I’ve seen and worked with are honest, thorough, caring and straight forward folks. The answer to why a foster family”s, or a shelter’s, experience with a dog differs from an adoptive family’s eventual experience, has more to do with how each of them structure a new dog’s environment. Sometimes, by necessity, but mostly from experience, rescue shelters and foster homes must be fairly structured. They have “rules” about how they do things around their place. Dogs actually like this and they thrive on consistency. Dogs like to know what the rules and rituals are. One truism of having a dog is: if we don’t give them rules, they will come up with their own. Sometimes, we get lucky, and the rituals that dogs come up with on their own, comport with our daily lives without too much stress and challenge. Many times though, dog”s self-made rules don’t work for us very well.  That’s when people usually call me and ask how to fix the problem.

ADOPTING A DOG IS SORT OF LIKE HIRING AN EMPLOYEE

To give you a human analogy, adopting a dog isn”t that much different than being hired. If you”ve ever had the experience of working for McDonalds, Starbucks, or some other equally structured company,  you”ll know that there’s a “company” way to do things. Well run companies have a structured way they bring in new employees. If, on the other hand, you’ve had the opposite experience of getting hired by a less structured company, you know first-hand the frustration that can result from a lack of clear protocols. If you show up for your first day on the job, and you find out that there’s no written job description or training manual, you might initially be excited by your freedom at this new job. You may think, “I guess I can just do things in whatever way I choose?” However, you’ll soon realize that there are lots of ways to do things “incorrectly” and there really is a “right way” to do many things at your new company. The problem is that the people that hired you are assuming that you’re on “psychic mode”.  They”re assuming that you can figure out exactly how they’d like everything done without them having to show you or tell you how to do it. That frustration, and dissatisfaction, you’ve felt in that sort of a job, is very much like what newly adopted dogs feel like in a new home without structure.

IS YOUR “FREEDOM/RESPONSIBILITY” QUOTIENT OUT OF WHACK?

This notion of planned structure is best described by the theoretical idea that I call “The Freedom/Responsibility Quotient”. That means that if we give a dog too much freedom relative to their level of responsibility or capability, you’ll end up with a dysfunctional outcome. Those of you who have teenagers will likely recognize the validity of this broader philosophical notion. So, what”s the solution if the “freedom/responsibility quotient” is out of whack? It’s pretty straight forward actually; immediately decrease the amount of freedom in the short run and begin to train more responsibility. In training with me, we focus on a three step training process: first “relationship”, second “basic skills”, and then third “polices” or default rules that apply all the time (often without having to give a command).

In any game plan for adopting a dog, some structured training should begin as soon as possible. Ideally, the two of you will go for a structured walk before you even get home. That walk should have as its goal the establishment of some very basic relationship rules. Essentially, with this initial walk (and all walks after that) you should subtly be teaching your new dog that they don”t determine: where you go, how fast you go, or where you turn, or stop.  The basic notion in a structured walk is to coach our new dog in the fact that it”s not “their walk” – it”s yours.  Beyond that structured walk, training in basic obedience is crucial to getting a dog on the right track as soon as possible. So, if you’re having various behavioral issues with your dog you may have already called a trainer, but frequently “obedience training” per se probably won’t solve all of your issue. Any training you do will likely have to be combined with some household structure and some behavior modification. So, while you’re waiting for your first obedience class, or for the in-home trainer to show up, the quickest way to shift the “freedom/responsibility quotient” is, begin limiting freedoms – starting today.

1)   Start by limiting the amount of free space your dog has. Close most, if not all, of the doors in your house and get a baby gate or two. The physical restriction of space and the increased reliance on you to get from place to place, is a move in the right “relationship” direction.

2)   Disallow jumping up into laps (yes, even for small dogs) 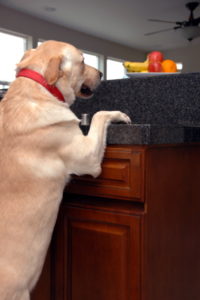 3)   Start instituting a “no getting up on”: the furniture, the beds, the kids (the kitchen counter, if that’s necessary)

4)   Have your dog drag their leash around when they’re with you so you can grab the leash to guide them out of areas or away from things they’re not allowed near. While this seems like “training” advice it”s actually just a freedom issue. If you say, “Hey, get out of there!”, and your dog ignores you then you have taught them that they are “free” to ignore you if they don’t feel like listening. Frequently, with a new dog in your house, this doesn’t have to be a “correction” or even that big of a conflict. The “subtext” in my head is often, “oh, you don’t know what ‘get out of there’ means”. “Let me show you”, and then I guide the dog out of the area with intermittent light pulls on the leash. If you simply showed a dog what you meant for them to do, after you said something once, instead of allowing them to ignore you, you’d find that your dog’s view of his environment and of his relationship with you would shift dramatically.

5)   Get a crate if you don’t have one, and start conditioning your dog to being in it. Start this conditioning process by feeding them all of their meals in the crate (without closing the gate). Then, progress from there to closing the gate for a few seconds to a few minutes. After that, progress to leaving your dog for random longer crate stays to increase their capacity to be in the crate.  Frequently, we don”t think of being in a crate as a training issue to progress through incrementally (in the way most of us think about learning a sit).  If you treat being in a crate as a training issue, you”ll find greater success.

6)   Take your dog out to the bathroom area on leash. That is, don’t just send them into the back yard to “go” (maybe), and then find them at the sliding glass door a half hour later.

9)   Always do a few minutes of obedience homework prior to every meal. If you haven’t started any obedience yet. Try holding the bowl of food and say, “sit”. Then just wait. If this is the first time you’ve ever said that to your new dog, you might think about cheating a bit and repeating the command once or twice. I’ve tried this waiting game with shelter dogs and I find about eighty percent after no more than a minute or so simply sit (sometimes after trying several other behaviors). For the first couple feedings, while introducing this sit behavior, put the bowl down immediately after they sit. After a few repetitions begin to wait for several seconds before placing the food bowl on the floor. Progressively increase the amount of time they are expected to sit prior to each meal.  After several days of this activity, you”ve likely been introducing other commands like down, or heel, so you can begin asking for other behaviors that you”ve introduced as well.  Having them drag their leash around may help in these pre-feeding homework sessions as well.

10)   Practice giving and taking away toys from your dog consistently. You may start by replacing toys rather than just taking them away for a few minutes. You might think about taking a regular chew toy away for a minute and then replacing it with a Kong with peanut butter in it. One safety note here: be alert to any body language around toys, beds, and food bowls with newly adopted dogs. Some of these guys have been fending for themselves for a while and can show some protest at having anything taken away from them. If you see any low level signs of this resource guarding or object possessiveness  call a trainer immediately to help you work through it. (HINT: this is an important behavioral trait to ask about when considering any particular rescue dog adoption)

THIS ONE IS NOT A FREEDOM ISSUE (it just makes everything else easier!)

11)   Ensure that your dog is exercised every day. Make sure though, that it’s not too “freewheeling”. That is, don’t have them running all over the place off leash without any ability to bring them back. There’s few worse lessons to teach a dog than “I’m slower than you are and have no way to make you come back”.

Now, I’m sure there are lots of ideas that you could come up with in your specific house to create structure. Also, keep in mind that these rules aren’t necessarily forever. You can begin offering more freedom once your dog has demonstrated greater levels of responsibility. The main concept to grasp is that you need to do three things to foster a clear relationship when you adopt a dog:

1) Limit their freedom early on

Hopefully, these ideas and principles can help bring back the “magic” that you first felt prior to the “honey moon” wearing off after your dog’s initial couple of weeks.  If you”re reading this prior to adopting your dog then you”re way ahead of the game.  Kudo”s for being so proactive!

Best of luck with your new pooch. Your dog is lucky to have someone who cares enough to read these articles about how to be a better owner.