YOUR PUPPY’S FIRST COUPLE OF WEEKS: Tips to Make the Transition Easier

YOUR PUPPY’S FIRST COUPLE OF WEEKS: Tips to Make the Transition Easier 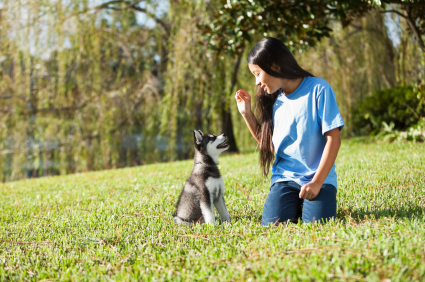 Many people describe to us that the first few days (and particularly nights) at home with a new pup are difficultfor the whole family (pup included). Your puppy has likely been with litter mates and mom 24/7, and has been used to a certain schedule and surroundings, while whelping. There will be a little transition period when acclimating to your home.  There are different schedules that pup will have to get used to, there will be more ‘alone time’, and new sounds, sights, and smells to process.  A puppy usually expresses stress when they’re alone by whining and barking.  They can also express some anxiety in new surroundings by hiding, chewing, and scratching at doors and separator gates.  Here’s a few things you can do (and shouldn’t do) to help your puppy get acclimated to their new surroundings during this transitional time in your home.

CRATE TIP: If you’re reading this prior to bringing your puppy home, ask your breeder to spend a few minutes each day with your pup, in weeks 6-7, to start the conditioning process to a crate.

Each time you feed your new puppy they will likely become really excited. (Warning: if your pup isn’t showing any interest in food in the first 24-36 hours call your vet immediately).  Start creating the association from your first feeding that as soon as your pup ‘settles down’ the food shows up.  Hold the prepared food bowl above your pup’s head and say “sit” … then wait … and say “sit” again … and repeat this several times until the pup’s little behind lands on the floor (even for a second) then immediately place the food bowl down and say. “go ahead!” Many people are unsure of whether an 8 week old puppy can learn “sit”.  Most can.  I wouldn’t worry about it too much right now though.  The goal is to create an association with your pup between getting food from you and being attentive and calm.  The proficiency of the sit behavior will come later, but if you can start conditioning it now – why not?FEEDING/CRATE TIP: If you”re having to work at getting your pup to like their crate, always feed puppy in their crate.

NOTE: Please don’t ”free feed”.  That is, keep food out all the time.  Beginning a schedule and a specific association between your ‘help and assistance’ and feeding is crucial right now.

Having water out freely is usually OK.  Some pups that have a harder time controlling their bladder may need a more scheduled access to water. Even if your pup seems to handle free water fine though, you may still want to take it away an hour and a half before bedtime to assist in their ability to make it longer through the night.

Jumping and Climbing on You

Many trainers will tell you to treat a puppy like an adult dog.  “If you’re not going to like them jumping on you when they weigh 70 pounds don’t let them do it when they’re a puppy”.  Well … sort of true.  I follow that line of thinking once a pup begins to mature a bit.  However, in the first couple weeks I want to create as much relaxed and easy bonding time as I can.  This includes some jumping, climbing and crawling up on you.  Be sure to have lots of physical contact between family members and your new pup. (Warning: pups sometimes play with other pups by biting their faces – don’t allow a child’s face too near sharp little puppy teeth)

Telling Your Pup NO!

There aren’t a lot of BIG – “NO’s” in the first couple weeks either by the way.  You ought to have a puppy area that you’ve puppy proofed and you should be restricting your puppy’s access to this “puppy area”.  New pups certainly don’t get a free run of the house.  In other words, create an area in which you won’t being hollering at your puppy for doing the wrong thing frequently.  If they begin to nibble on you or play bite, say NO calmly but firmly and then put a chew toy in their mouth.  The protocol for stopping a puppy from inappropriate use of teeth on you or anything else in this first couple weeks is simply distract them from the inappropriate object and redirect them towards what they’re allowed to chew.

PLAY TIME AND SUPERVISED INSIDE TIME

The first two rules regarding inside time for puppies are: 1) Inside time is always supervised and 2) Inside time is always supervised.  No that’s not a typo.  The cardinal rule of house breaking (teaching a pup to go to the bathroom outside or in whatever particular place you’ve set up for that) is ‘no unsupervised time inside’.  There are two other rules to add to this.  The first is: inside ‘supervised’ time only comes after bathroom trips outside, and the second rule, puppy never gets a full run of your house.  Investing in a couple of pet gates to block off a smaller, ‘puppy proofed’, section of your house will pay dividends in the long run.  Ideally, this small section will be adjacent to the door that you’re going to take them out to go to the bathroom. (If you need more advice on house breaking and a sample schedule of how to use a crate to manage that, you can also read our post on housebreaking 101)

Your pup will likely be used to a collar when they arrive, but leashes may be completely new.  For pups between 8-10 weeks old I like using retractable leashes.  They keep the leash out from under their feet and are easy to manage with scampering, exploring little pups.  By way of previewing future work though, we will begin to move away from those retractable leashes fairly quickly in training puppies so they can start having a more free experience of walking with you on a loose leash.  This transition from retractable leash to regular leash, takes place somewhere in the 10-12 week stage.

Exercise ”per se” really isn’t an issue with a young pup.  I’d recommend you think of it more as exploratory expeditions.  Give your pup a lot of chances to use their nose in new places (though not around areas that other dogs frequent) and give them a couple walks around the block or outings to some place new each day.  Your puppy won’t be allowed to be around other dogs in the first few weeks until they have received many of their vaccinations.  This means no pet stores, dog parks, or training classes in the first few weeks.  Do take your pup out to see many different things though.  Definitely have your pup meet several new people a day.  Some trainers recommend your pup meets 100 new people by the age of 12 weeks (that’s about 3-4 people a day by the way).  It”s a good goal to have but your pup won’t be ruined if you only get to 83.  The point is to get your puppy consistently comfortable on a daily basis with meeting new people.

Hopefully, that gives you a few ideas to make the first few weeks less stressful on your family and your new puppy.  If there are questions that you”d still like answers to, feel free to ask questions in the comments and I”ll address it in a subsequent post.

By the way, some other articles on my blog that you might find applicable to your puppy research are:

House Breaking 201: teaching your pup to “ask” to go outside