How to Pick a Puppy

How to Pick a Puppy

Many people call with questions about how to pick a puppy from a litter.  Assuming you have already decided on a particular breeder, in today’s blog article, I’d like to give you a quick set of crib notes on what to look for when picking a puppy.  Remember, you have to have a clear plan prior to visiting any puppies.  If you don’t have a set of criteria and a clear way to assess them, you’ll likely come home with the first puppy you spend any amount of time with.  Sometimes this “love at first sight” game plan works, but frequently, it results in spending many more hours training and coping with traits you never intended to have in your puppy.
Calculate your ideal measurements with weight training alphabolin bodybuilding room in soultz-sous-forêts, ok form – (bas-rhin).
IMPORTANT NOTE: If you can swing it, visit several times to get the broadest sample of observations that you can.

The raw material that goes into making your puppy is walking around right now.  Set an appointment to meet the parents.  I probably don’t have to tell you what to look for:  If you like the look, health, and demeanor (particularly their energy level and their ability to settle down after being stimulated) of the parents then the next step is to see what kind of puppies they’ve produced in the past.
Naked gay nude sex bodybuilding cum compilation large submissive slut wife sucks buy anavar sylvester stallone: ​​the strength training of a legend.
Also, make sure that certificates are present for those parents having been tested negative for any of the particular maladies that your specific breed is known for.

3) MEET OTHER PUPPIES FROM THOSE SAME PARENTS

Often breeders will keep high quality pups in their own program, and will have them on the property for you to visit.  Certainly, meet those pups that the breeder has kept but, additionally, get a list of people in your area that have pups from a previous litter.  See as many as you can because pups, even siblings from the same litter, can vary quite a bit.

The puppies environment, including:  the yard they play in, the pen they spend much of their time in, and the household they are being socialized in should be clean and well taken care of.  There should be no persistent smells or clutter around any of the puppy areas.  The bathroom area for the adult dogs, as well as the puppy pen,  should be clean and free of any waste.

Beyond getting technical about any particular disease here, you need to get the general feel that the litter, as well as the particular pup you’re considering, are exhibiting all the signs of strong and healthy puppies.  These include:

Essentially, the behavioral assessment of any puppy primarily falls into the old “kindergarten” report card category of – “plays nicely with others” (both canine and human).  Your assessment of your particular puppy that you’re considering will be an abridged version of the 7 week puppy aptitude test that many breeders do.  You can ask the breeder for their results and then do your own assessment to double check their findings.

Associations with other pups 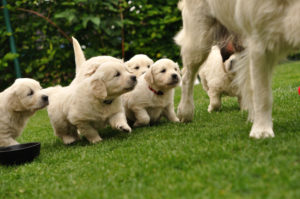 How Do the Puppies Interact with Each Other?

Does the puppy seems to like interacting with people? 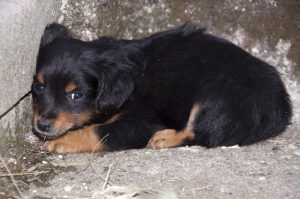 Stand a few feet away from the pup, crouch down and call the puppy making clucking sounds.  Does puppy come over to you?  A pup should like investigating you and being interacted with people, balanced with a desire to go back and play with litter mates.   If  puppy hides a lot or slinks into corners, many of us have a tendency to want to “save” that puppy by choosing him or her.  The puppy’s reticence to interact with you or the other puppies may be a big red flag for behavior issues later in life.

Many people fawningly say, “My puppy picked me!”  They’re experience is that, when they first approach the puppy pen, one puppy comes charging up to the fence and leaps up to make contact at the top of the gate.  People sometimes see this as “love at first sight”, when in actuality, it’s a demonstration of that puppy, being the most dominant puppy in the litter, venturing out to see if you’re OK.  I hear this “puppy found me” story line a lot after a dog grows up and is more dominant and willful than average later.  So, be sure you’re assessing the behavioral characteristics accurately when visiting with the puppy you’re considering.

Is the pup OK with being handled? (this gives you an idea of how easy Vet visits and grooming will be later)

To test this, pick the pup up and cradle him or her like a baby(some people like cradling a pup upside down to assess a willingness to be put in a vulnerable position) While holding them, handle them gently and slightly restrict their movement if the wiggle around.  Handle their face, paws, ears, tail etc.  A balanced puppy should accept a good amount of handling before protesting and communicating that they want to be put down.

Does the pup understand how to limit their biting?

As you’re interacting with the pup, (down at their level on the ground), they’re going to inevitably nibble and bite you … it’s what little puppies do).  When they do this, act as if it really hurt.  Yelp, pull your hand away and turn your side to them.  See if the pup attempts a more gentle interaction or simply continues biting at the same level.  You’re looking for a puppy to understand that this means “take it down a notch – that biting is too hard”

This trait, that is, the ability to recover in the their nervous system after being over stimulated by sight or sound, may be the best predictors of having a solid and well balanced dog.

In puppy aptitude tests, breeders often use the opening of an umbrella in front of a puppy’s face, to startle a pup visually.  It might be considered ‘bad form’ though to walk into a pen of puppies, and pop open an umbrella directly at them.  You probably won’t be visiting very long if you try that technique.  I like to just take off my jacket while I’m playing with the pup I’m considering, and shake it out once in front of them, as a lay it down on a chair nearby.  You can use anything large, you’re really just looking to have a large visual silhouette move or appear in front of the pup suddenly.  All pups will get startled, but you’re looking for the secondary response.  These generally fall into three categories:

It may be obvious, but you’re looking for category 3 – the recovers and investigates option.

You want to do this same sort of test with a brief loud noise too.  You’re really looking at the same frame work for this sound test as well.  You want to see if the pup:

One of the “biggies” in behavioral traits is resource guarding.  It’s a tough trait to train out of a dog.  It can be done in many instances with hard work, but many owners tell me that they are so surprised by the intensity of the aggressive display from their dog in these situations that even when they seem “better”, the thought of risking another snap or bite is frequently too much for many owners to put up with.  Now, let me be clear, many dogs will place their chin over a chew toy, or put a paw on something they’re playing with, to mildly indicate that they don’t want you to take it.  However, once you follow through with taking the object away, they acquiesce and move onto something else.  That’s not what I mean by resource guarding.  Resource guarding behavior escalates fast and is intense.

How bad is the guarding?

Here’s what to do with a pup you’re assessing: (Depending on the breed – I like to do this with a pair of leather work gloves if there is any chance of a resource guarding reaction)
Topic: best anabolic for bodybuilding, buy bodybuilding steroids buy test cyp buy steroid, buy bodybuilding growth hormone.
Give a pup a high value item (usually some food in a bowl or a highly sought after chew toy).  After the pup has had a bite or two of food from the bowl, or interacted with the chew toy for 5- 10 seconds, walk back up to the pup and, in at a normal speed, reach toward the bowl or chew toy as if to take it away.  You will generally get three categories of response:

Hopefully, this gives you a good “cheat sheet’ to go by when doing research for your next pup.  Feel free to comment and drop me an email with any questions.

Good luck in your puppy search.