I had a discussion, with a prospective client a few months back, that I thought might be good “food for thought” regarding the topic of whether training a dog is detrimental for his spirit .  Now, the names and identifying facts have been changed to protect the identity of this person, however, I should tell you that this story is totally factual.  The reason I’m clarifying this is that this conversation may be an epitomizing example of the saying ‘truth is stranger than fiction’.  I wasn’t actually sure I believed some of what this client told me even as she was saying it.  Unfortunately, it all turned out to be true.

Like many prospective clients, a woman called me with her list of dog behavior issues that were, in her words, “driving her crazy”.   At the outset of our conversation, she listed a few obedience commands that she thought she would like to teach her dog right away.  These were: Leave it, No, play nice, and Off.  She described to me that she and her husband had determined that if their dog knew these commands then all their troubles would be remedied.

As I do in many initial discussions, I asked, “What kinds of training have you tried in the past?”  Her pause indicated to me that this was a tough question for her.

She responded after some thought with, “well, nothing.   He’s really such a good boy; my husband and I have talked about his behaviors a lot, but he’s so much a full member of our family, that I guess we haven’t done anything about these issues because we don’t want to crush his spirit or spoil his fun … he’s just so excited about life! He’s just really excited to interact with people! …. It can get a little over the top sometimes for some people though,” she added as an afterthought.

Upon learning that her dog was a three year old, male, Rottweiler, we proceeded to talk about the specific behavioral issues that she was concerned with.  At the top of the list was her Rottie’s “shear joy” (yes, her words) in chasing and running down small children at the off leash park, knocking them over, and pinning them to the ground with a big paw … and sometimes growling if they made too much noise during the incident (so you can get the image in your head right, he weighs 110 lbs. and he prefers children under 5 years old as his chase toys).

Now, it was my turn to pause on the phone call.

She quickly filled the silence with, “oh, he never hurts them … it’s, it”s, it’s certainly not aggression, ” … “I think he just wants to herd them and take care of them! That’s one of the things Rottweiler’s were bred for … herding! And really, he’s such a good boy! … It’s really tough for us because it’s one of the things he likes to do most in the world!  He always looks so proud when he wins the chase game!” she added. (picture that last sentence with the tonality of a mother announcing that her child just made the honor roll and you’ll get the full measure of what was said)  I experienced something that I usually don”t  …  a slight loss for words!

After a few seconds, the only question that came to my mind was, “so, it seems like you don’t mind him doing this all that much?”

“Well, I mean, I know he’d never hurt anyone … he’s a really, really good boy … it’s just that … well … parents of the children seem to get so upset,” she pleaded.

“Really?!” I sarcastically responded with a chuckle.

“I try to explain to them that its natural herding behavior, but you know how non-dog people are,” she added.

“Do you come across a lot of non-dog people at the off leash park?” I retorted, trying to make a subtle point. “Let me ask you this,” I continued, “do you have children?”

I had to clarify with her that this was the name of her Rottweiler.

To summarize the rest of the story for the purposes of time, we had a long discussion about how to make a dog “part of your family” without letting him do whatever he wants, whenever he wants.  After starting lessons, she indicated that she had reluctantly decided to do some training with me, mostly because of the fear of being sued by the parents of the kids her dog was targeting.  After a few weeks of training, Beau learned to come back when he was called.  He learned some other basics like, walking on a loose leash, sit, down and ‘leave it’ and how to get into the car on command but most importantly he learned that children were under no circumstances to be chased or jumped on.  He did still have fun at the park … chasing toys instead of kids.  His spirit was far from crushed, and in fact, he exhibited much less anxious frenetic energy.  To my eye, he was a happier dog all around.  So, I suppose all’s well that ends well (except, of course, for all the children that will now have to go to therapy for their dog phobia later in life, I suppose). 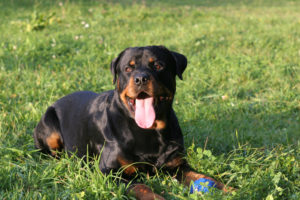 The “food for thought” part of this story, in my mind, is for us all to assess our philosophy on “adding a dog to our family”.  I think a lot of us think of our dog as a “family member”, however, even human members of our families (usually) have behavioral rules and expectations that they must abide by.  We wouldn”t let our human children run all over the playground pushing down children one third their size.  And I’m fairly certain that most of us don”t allow our “human” teenagers to run up and knock over everyone that they meet because they are ‘so eager to say hi’.  We don”t let them destroy our dining room table legs, pull up carpet, take food that’s not theirs (OK, maybe this one is the very definition of being a teenager), and simply not listen to us if they had something better to do – would we?Now, I’m a big fan of people living their lives the way they see fit. So, I always hesitate to tell people how to order their lives.  That being said, if you find yourself struggling with the twin (and in some people’s minds mutually exclusive) interests of ‘loving’ your dog and ‘training’ your dog, I would suggest thinking of your “family member” (that’s your dog, in case anyone is confused at this point) as having an inherent ability to be responsible.  Training, and clear default rules, will result in you, and other people, enjoying your dog more. Your stress level will go down, due to a decrease of “behavioral incidents”.  Further, your dog will be happier.  Dogs actually feel more grounded and comfortable when they have some parameters on their daily life.  Regularity of schedule,  functional predictable rituals, and a clear knowledge of expectations from you, fosters a better relationship with your dog and will ultimately allow you to do more with them.

Oh, I suppose there’s another, more straight forward, lesson in this story too … don’t ever let your dog run down children at the park and treat them like chew toys.  Getting sued by parents might be the least problematic outcome for you and your dog!

Best of luck with your “non-spirit-crushing” training 🙂