Have you ever seen your dog twitch, talk, or move in his sleep? If so, you probably assumed he was dreaming… chasing a squirrel, sniffing down some food, going on a walk… and you may be right. According to many scientists and much research, like humans, dogs (and many other animals) also seem to experience dreams at times while they’re sleeping.

The Science Behind Dreaming Dogs

Research has been done using an electroencephalogram (EEG) on dogs, which detects electrical activity in the brain. The test has the ability to record a canine’s brain wave activity while sleeping. The outcome was similar to that of a human. The dog entered a deeper sleep phase (known as REM—rapid eye movement) where his breathing became more irregular, his mental activity heightened, and his eyes began to move rapidly. For a dog of average size, this is about 20 minutes into his sleep.

What do dogs dream about?

While it’s just about impossible to tell what dogs dream about exactly, since we can’t ask them, it’s very likely they dream about the same types of things humans do—things they experience throughout the day. Activities we perform throughout the day tend to make their way into our dreams in some form. The same likely goes for dogs. Your dog is probably reliving moments he experienced during the day and processing the new information, trying to make sense of it. Now, this doesn’t mean their dreams consist of a perfectly accurate account of the day’s happenings… Just as dreaming is for us at times, it can be very exaggerated and sometimes unpleasant for dogs as well.

Do certain dogs dream more than others?

Smaller dogs seem to dream more frequently and have shorter dreams than bigger dogs, and puppies tend to have more dreams than older dogs, perhaps due to their developing brains; everything is newer to them, so they have more to process than older dogs, who have become accustomed to things they’ve been seeing and experiencing for years.

Should you wake a dog from his dream?

In short, no. It’s completely natural for your dog to dream, just like it is for you. Some owners become concerned when their dog is yipping in his sleep. Generally, try to refrain from waking your sleeping pup. He needs deep sleep to refresh and recharge for when he wakes again. Besides that, if your dog is dreaming and you wake him suddenly, there’s no telling how he will react. He may accidentally lash out in a state of confusion and bite someone, even if he’s not typically a biter. What if your dog was dreaming about catching a shady character and you woke him while he was chasing him down? If you wake your dog from a fairly realistic dream, your dog may not be able to distinguish from his dream and reality at that moment. Therefore, it’s best to let your dog sleep and wake up on his own.

If you NEED to wake up your dog for some reason, do it vocally, as opposed to touching him to wake him up. Gently tell your dog to wake up so you don’t frighten him.

Need help training your dog or puppy? The Dog’s Way Training Course has got to be the best dog training DVD course available today! It will help you establish a clear relationship with your dog, so (s)he naturally looks to you for how to do things. Watch real untrained people and their dogs progress through the lessons with dog trainer Sean McDaniel so you can learn from their mistakes and challenges. If you have any questions about your dog’s behavior, give us a call or send us a message HERE. We’d love to hear from you! Also, check out our other great blog posts on The Dog’s Way blog to find answers to questions you’ve probably been asking for years! 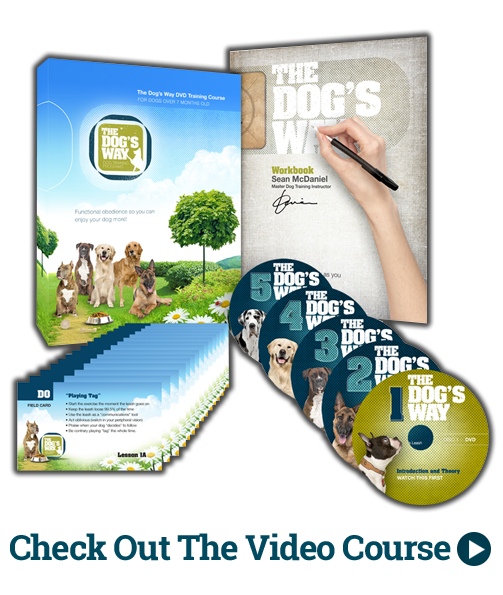